Pastor Jimmy James Wandera is the Director of Radiant Love Care at Masafu Gospel Centre. In 2003 he was invited as a pastor to preach at the burial of a child who had died in the next village. When the child’s history was read he realized that both parents had died, and the girl was staying with a grandmother who was 80 years of age and therefore could not work. Because they lacked food to eat they became weak and, because the child was also living with AIDS, she died first. They lived alone, and so nobody in the neighbourhood knew that the child had died and the old woman was starving. Eventually the old woman was taken to hospital. When Jimmy arrived at the hospital to check on the old woman, she said to him ' Just go and bury the child. You people are eating in the church while people outside are starving'. She died a week later. When Jimmy arrived at the child's funeral he could not preach - he felt speechless! There lay a child who had been trying to survive with the old woman, and the church nearby were doing nothing. He started crying because he had just finished a seminar and crusade, which had cost five hundred pounds to run, including feeding for all those attending who had camped at the church. Jimmy wished that as a minister he had asked people to come from home and only offered them lunch so that some money might have been saved for those dying children. When he went home he shared his thoughts with his mother (who later died without seeing Jimmy’s vision go through). They started going around identifying the orphans and taking those who were sick for HIV testing. As a result, in two weeks they found that out of 700 orphans 350 were living with AIDS/HIV. So they went into action to begin encouraging the grandmothers and families who had the care of the children. Jimmy approached other churches hoping that they could offer some help. Some people gave food from their harvest, which was given to those who were very weak and malnourished.

The Orphans in 2006
At first the children met for one meal a day in a building lent by a member of the community. But it became evident that these weak children couldn't keep on walking great distances each day for the meal. So in 2007 the work was reorganised into 6 centres, each based on a church with a Pastor and 10 volunteers to look after the children's welfare. Where possible children were placed with a blood relative. Where no relative was identified church members were encouraged to foster. Education was given to allay fears and remove stigma. Land was lent to grow Cassava and Maize in 5 of the centres.

In October 2007 Compassion International agreed to sponsor over 200 orphans - but required a building where they could meet weekly for Christian teaching and health monitoring. Streams of Mercy paid for the iron sheets needed to complete the building, which was named ' The Shining Centre' for obvious reasons!
Radiant Love still have over 200 orphans in their care. In February 2010 we had a special day with the children and their guardians at the Radiant Love office. There was a good meal, gifts for each child and entertainment by the Sunday School Children. 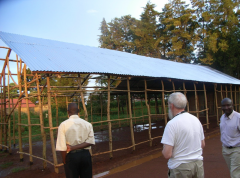 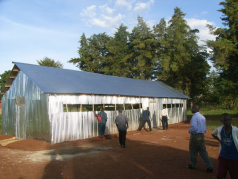 We uses cookies for personalisation, analytics, and for other purposes. Learn more or change your cookie preferences. By interacting with this site, you agree to our use of cookies.